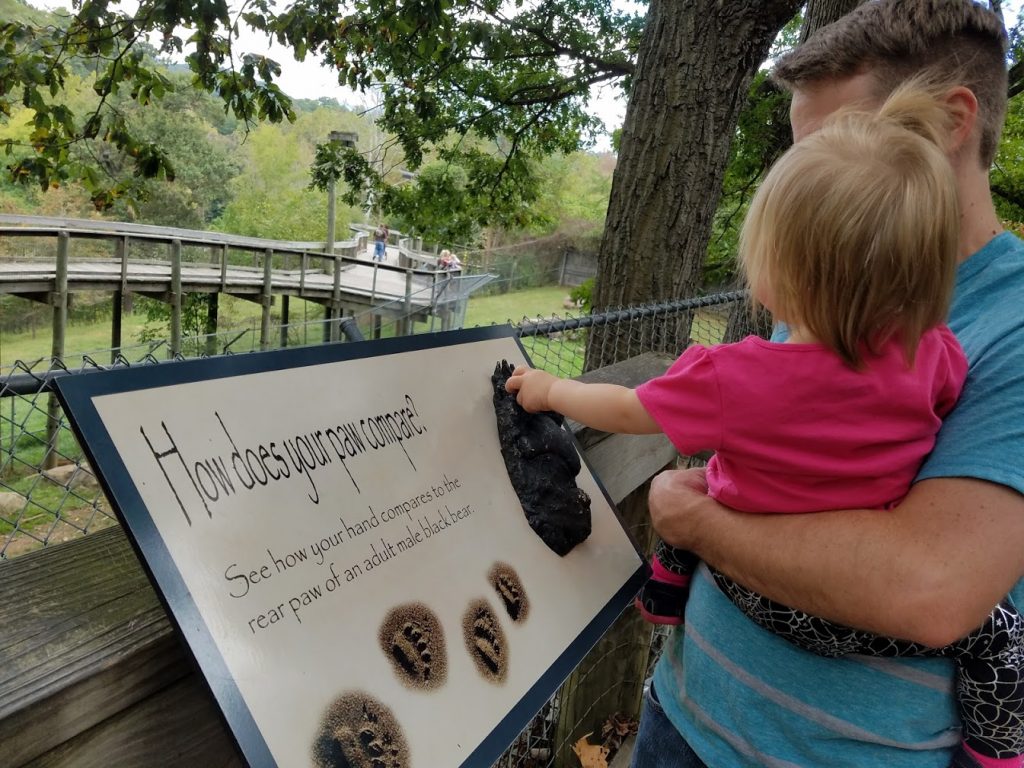 The Western North Carolina Nature Center is a 42-acre zoological park operated by the Parks and Recreation department. In the past the center was called the Asheville City Zoo before rebranding. The Nature Center hosts a collection of animals native to the southern Appalachian mountains, focusing on the habitats and range of native animals.

The park is open 7 days a week from 10am to 5pm. Most of the park is outdoors, so plan your trip around the weather. Admission is very reasonable and the park has discounts if you can prove being an Asheville resident. Adults are $10.95 ($7.95 with discount), kids at $6.95 ($5.95) and toddlers under 2 are free.

The park is located at 75 Gashes Creek Rd, Asheville, NC. The parking lot is split between the top and bottom of a hill. If you are bringing a stroller, the upper parking lot is a better option. The downhill entrance does not have an elevator to the ticket entrance (or we could not find it). Later on we found out the center has a stroller parking lot for our exact reason. A quick reminder, do not park under the black walnut trees in the fall. Pay attention to the ground under a tree before parking, the walnuts have quite an impact.

The WNC Nature Center has a nice flow to the park spreading out the exhibits and utilizing the entire area. We decide to start on the large exhibits first while Riley was content in the stroller. Taking the first trail to the left by the Turtle Amphitheater swung us out to the Raccoon, Fox and Wolf Exhibits. The raccoons and foxes were active and moving around. As with most zoos, catching the bigger predators moving depends on the timing and the weather. Unfortunately for us, we only got glimpses of the wolves, but Riley had a great time looking at the statue. 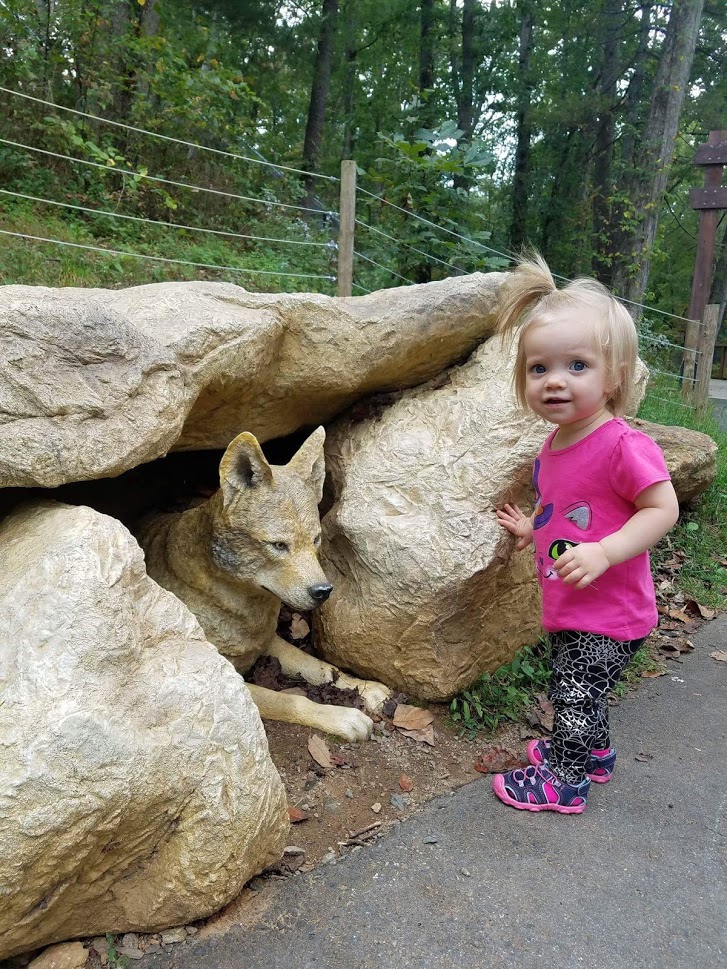 For the older kids, the Arachnid Adventure Playground is at the back of the loop next to the Trillium Nature Trail. The playground is a raised area of ropes that let the kids climb up and over them. Perfect spot for the older kids to blow off steam, but not the best spot for toddlers. Later on there is a spot with large wooden blocks and rolling toys that will work for the toddlers. On this trip it was threatening to rain, so we skipped the Trillium Nature Trail.

Next we made it to the cougar and bobcat habitats. The boardwalk is setup well to accomodate for strollers. The walkways have the top boards, but the gap between handrails and ground is wire allowing kids in strollers to see the animals. The setup is appreciated so parents can keep kids secured for areas instead of holding them up the entire time. 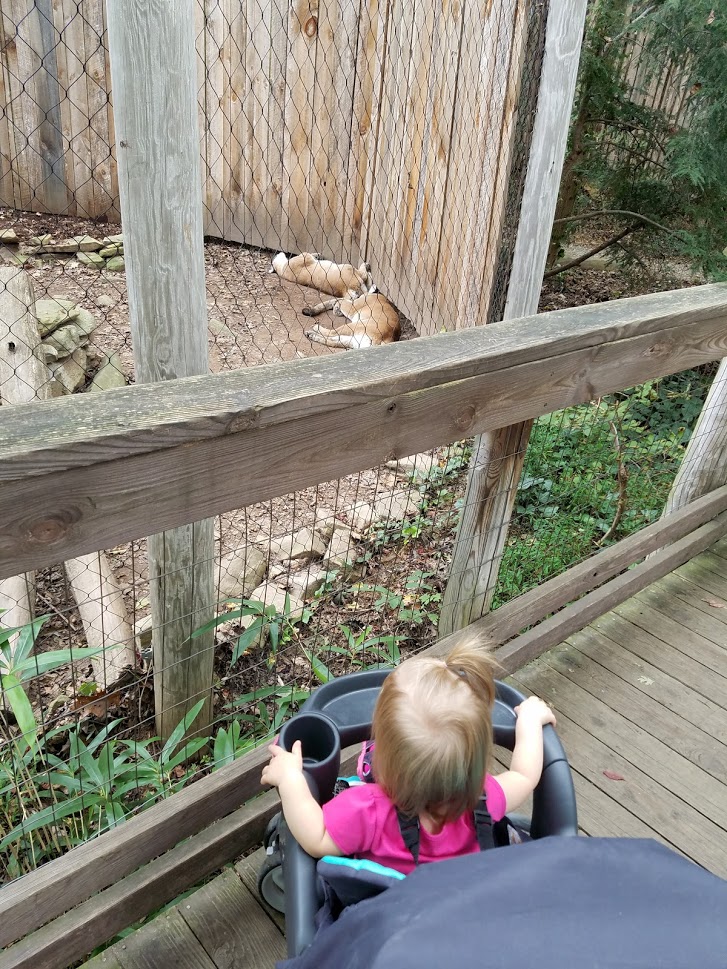 We continued on the boardwalks to view the White Tail deer, and the black bears from above. The high boardwalks give a different perspective compared to other zoos. We may have been lucky, but the deer and the bear were active and it might be due to having all of us elevated so high. The exhibits are spaced out well and the park has plenty of flat areas with distractions for the kids. Outside of the Birds of prey exhibit are a couple large turtle statues that everyone climbs on for pictures. At the Otter Falls the kids can slide before moving to the next exhibit. In fact, on the official park map they have highlighted seven areas called Nature Play to give parents a guideline for running around areas. After the stroller time, our daughter was getting restless so we headed over to the petting area. The petting area is a mix of goats, sheep and a donkey. Kids of all ages enjoyed the different animals. Again, the setup is nice with wire fencing instead of solid wood so kids of all sizes can see the animals. It gives them time to adjust before getting the confidence to reach out and pet them. 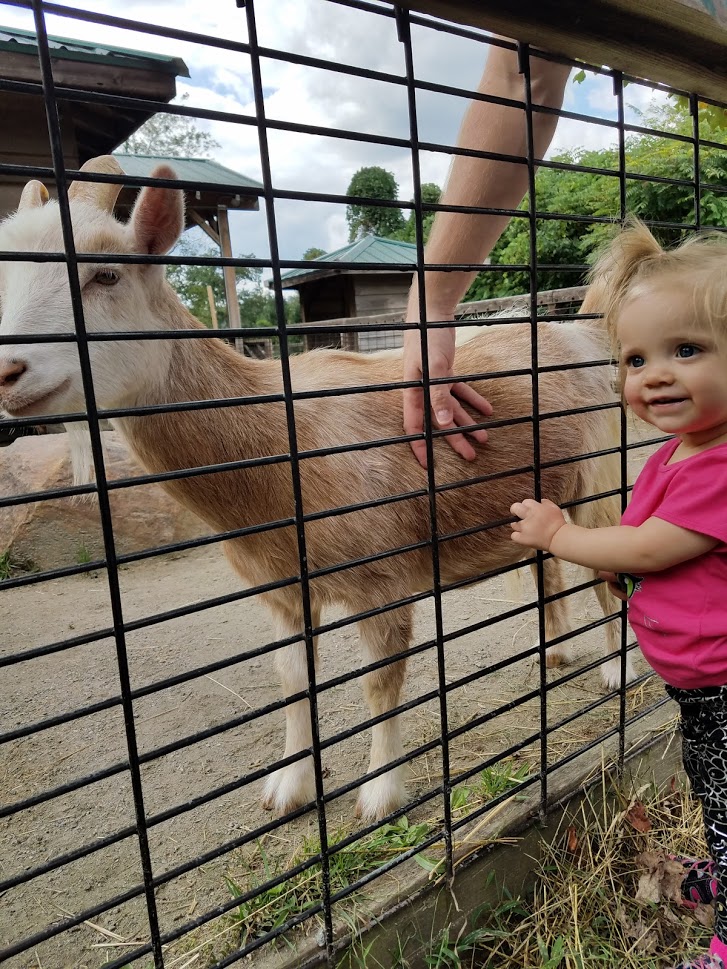 Next to the petting area is a large barn. In the stalls closest to the entrance the park set up a kids corner with kid size tools such as rakes, brooms and shovels. Once discovered, all of the kids rushed to the toys and swept everything.  It was a good laugh as the kids took over their jobs and worked together to sweep the hay into piles and move it around.

We started heading out of the park and caught an animal show at the Turtle Amphitheater. The staff member loved his job and gave a great show of the different animals with him. Make sure to check the signs informing the show hours and try to catch one. For families of mixed age groups, the play space with wooden toys and blocks is right next to the amphitheater for the smallest kids.

Overall the park is worthwhile trip. We spent close to two hours walking through everything once. Families can extend the trip by taking the nature trail or eating at Captain Dave’s Pirate Dawgs. If you live in the area, your family should consider becoming members of the zoo. Members receive free admission for the year, plus discounts at 275 other zoos, aquariums or science centers nationwide. The full list of benefits is on the WNC Nature Center website.